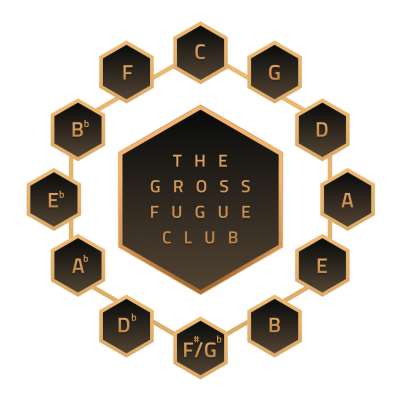 Bach to The Future

The Fugue is a musical form that has been argued by musicologists and music critics as the purest and highest of the Baroque arts. In a fugue, a composer weaves a contrapuntal fabric using independent but imitative musical lines, creating increasing complexity all the while drawing upon a set of straightforward principles and procedures.

As the most progressive work of the greatest composer in the history of Western music, Ludwig van Beethoven’s Grosse Fugue attracts great respect and is a true testament to the power of human creativity. Renowned Russian composer Igor Stravinsky called it “an absolutely contemporary piece of music that will be contemporary forever.”

In the generation before Beethoven, J.S. Bach brought intense exploration to the fugue, and his work represents the apotheosis of the form. In his Well-Tempered Clavier he composed two monumental collections of fugues for the keyboard, twice encompassing all 24 major and minor keys, utilizing a new system of tuning that allowed for the seamless integration of chromaticism to a level theretofore unknown to the musical world.

Perhaps Bach’s most celebrated and extensively studied collection of contrapuntal works, The Art of Fugue explores the possibilities inherent in a single, simple musical theme. That Bach could create such a towering edifice with such seemingly basic material is a true wonder to behold. Demonstrating every compositional technique and method known to him, Bach composed eighteen sections to this work. The collection remained unfinished however, as the composer died mid-composition. One of his last phrases incorporated his musical signature B-A-C-H (the notes Bb-A-C-B) into the contrapuntal voicing. Unfortunately, what further treasures he may have composed beyond this moment we will never know.

Dr. Jeff Kryka’s piece The Gross Fugue, is modeled after Bach’s Well-Tempered Clavier, as a set of fugues in all 24 keys. Yet it encompasses a wide eclecticism of styles, from classical to popular, from acoustic to electronic, drawing upon world music and a multitude of influences. Each fugue’s music is constructed using 12 instruments that 12 times play 12 distinct musical themes, this together makes “1 Gross” i.e. 144 units of distinct musical ideas, the App will generate these into exactly 49,140 pieces of entirely unique “Music Phase NFTs” (the length of the Music Phase will be different in each key). With each user’s own unique ordering of these Music Phase NFTs it will undoubtably create the longest piece in history with a potentially never-ending progression of music, by all the Music Phase NFT owners and the original composer together.

The user can employ the App to generate the Music Phase NFT live, either randomly or by selecting their preferred instruments while they are purchasing, perhaps a solo or an ensemble as desired; or they can opt to simply buy a pre-generated Music Phase NFT. It must be stressed that each combination of Music Phrases will only be sold ONCE as ONE edition and each is, by definition, unique.

As soon as the user owns more than one phase, they can start to build their own unique version of the music and participate in the creation of The Gross Fugue. The user may simply play the Music Phases in whatever order they like, OR “stack” them on top of each other, to create a new, more richly layered phrase. Based on the music theory, each music phrase is composed to work together with any other and they can be played in any order or combination, and it is up to the user to to build the most beautiful version of the piece to their own liking.

When the first 90 minutes’ worth of Music Phrases have been sold, the true magic starts. Since 90 minutes is the common length of a classical music concert, Dr. Kryka will rearrange and orchestrate the first 90 minutes of music sold into a live concert. The owner or owners of these 90 minutes of Music Phrase NFTs have thus created this concert together with the original composer of the music, and now will be able to hear the 90 minutes performed live. A digital recording of this performance will be issued as a Special Edition NFT. The original owner or owners of this 90 minutes of music will receive a percentage of the creation royalty and one edition of the new Special Edition NFT. The original “motherlode” 144-phrase combination of the fugue as conceived by the composer (which theoretically will never be collected by the NFT owners) will only be revealed and performed live in the concert and issued with the digital Special Edition NFT.

In total 24 live concerts will be held in locations that encompass all 24 time zones around the world. These concerts may take place in a concert hall, on a beach, on a mountain top, or on a boat in the middle of the ocean. No tickets will be sold to the public, only the Music Phase NFT owners can claim seats when they are made available. Of course, if the owner cannot attend a concert in person, they can transfer the tickets to friends and family, or resell the tickets. The music from the concert will be issued as a hard-copy album with a new NFT certificate, in a limited edition of 144 for each album. The original owner or owners of Music Phase NFTs in the album will receive 1 additional copy.

Now, together, you and I have the opportunity to participate in the creation of the largest and greatest eternal Fugue in history. We shall push the boundaries of music that Bach was never able to reach.

Los Angeles-based composer Dr. Jeff Kryka has been awarded by Turner Classic Movies, ASCAP, the RMALA, and the Henry Mancini Foundation. As both a composer and orchestrator, his work has been featured in major motion pictures, TV-shows, video games, and heard in concert halls across the globe. Jeff studied music composition at the University of Wisconsin-Madison (B.M. 2006) and at the University of California-Los Angeles (M.A. 2008 & Ph.D. 2011). Some of his recent credits include composing the score for the Disney+ original documentary series The Imagineering Story, and the documentary feature Traces of the Brush, as well as orchestrations on: Spider-Man: No Way Home, The Batman, Lightyear, Thor: Love and Thunder, Jurassic World: Dominion, Spider-Man: Far From Home, Jojo Rabbit, Jurassic World: Fallen Kingdom, Incredibles 2, Coco, Rogue One: A Star Wars Story, Doctor Strange, Spider-Man: Homecoming, Jurassic World, Star Trek Beyond, War for the Planet of the Apes, Inside Out, & Zootopia.